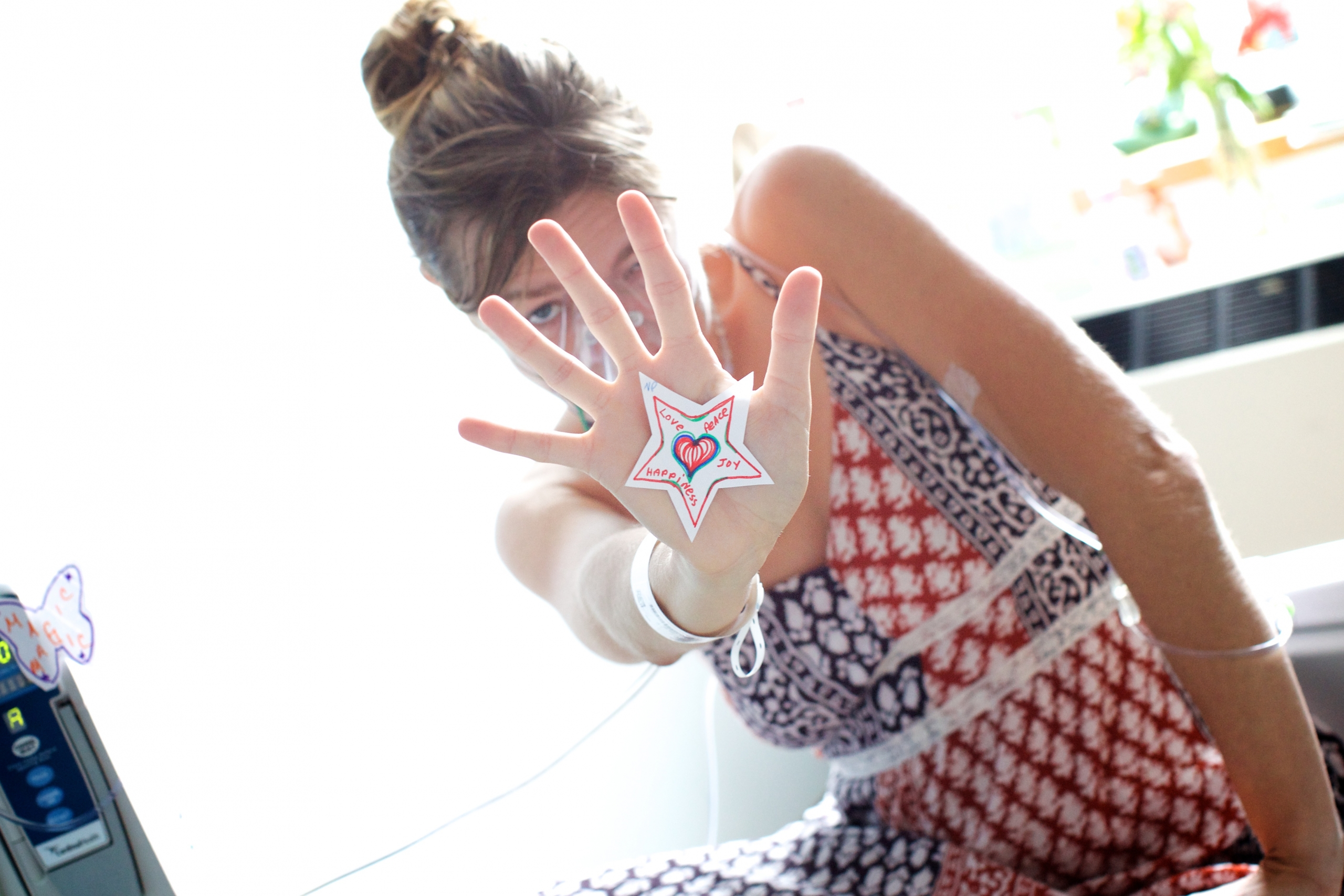 A note from the beginning

I’m Kori, and this is the story of how I got to the place of offering the BoosterJots concept to you. Taking medicine has been a part of my life since before I could talk. I was diagnosed with Cystic Fibrosis at 2 months old.

My first two-week hospital stay was a crash course into a very different way of life.

That first IV turned into a life with many, many more. I’ve seen different treatments come and go. I’ve seen techniques and systems and procedures change. I’ve seen hospital staff change and policies change. I have grown up in the medical system, and sometimes now I even refer to myself as a professional patient.

Fortunately, the care I have received has also helped me to live a beautiful life that also extends well beyond my medical treatments.

Becoming an active participant in my own care started simply enough: knowing my rates, times, and even just the names of medications. This led to asking questions and learning WHY I was taking them. It meant knowing which tests were being done when and why. And it meant understanding how my mental state for instance, how I felt going into IV placement (and eventually PICC line placement, a much more invasive form of IV) — impacted the outcome of the attempt.

What gradually dawned on me was that understanding my care and taking an active role in it was saving me from countless mistakes, some of which were potentially life threatening. This in itself is enough to make a case for patient advocacy and education, but I’ll save that for a future blog ;).

Eventually I was running my own IV meds, doing my own chest PT, and even making choices with my care givers about which treatments I would do and when. Being an engaged, aware patient helped me to forge a team approach with my caregivers, which they have repeatedly told me they appreciate.

This led to personal research regarding what actually worked for my body, not just in regard to my CF treatments, but to my body and my life as a whole. I began taking a closer look at my diet, different types of bodywork, other medical treatments, and approaches to healing from around the world.

I learned what worked for me, and through diet and bodywork, I was able to go four full years without having to be hospitalized for IV treatments, rather than going in every 6 months for IV antibiotics as I had been.

Cystic Fibrosis is a progressive disease. My body and my lungs have changed since that four-year respite. I go in for care more frequently now, but I am still doing very well for someone with my diagnosis. There’s no question (and my doctors agree) that taking a more active role in my health care has changed the course of where it looked like this disease was headed as I was entering my late teens.

By the time I was 20, I had had six sinus surgeries. By my third sinus surgery, my ENT (ear nose and throat doctor) told me that I just had to understand that I would probably need these surgeries every six months for the rest of my life. I dreaded those surgeries, so this news was heart breaking for me.

Here’s where taking an active role in my health care made a significant difference. I am happy to say, that with diligent diet choices and regular self-care, I HAVE NOT HAD A SINUS SURGERY IN OVER 14 YEARS. This alone would be enough of a reason for me to continue on my path. But as they say, there’s more: I am currently 34 years old and still breathing with my own lungs. Now, in case you’re not familiar with Cystic Fibrosis, this is an amazing feat for someone diagnosed with CF in 1979 who has homozygous deltaF508 (that’s the particular mutation of CF that I have). In fact, at one point I was asked to be part of a study because my caregivers could not understand how I was doing so well with my particular genetic mutation of Cystic Fibrosis. They wanted to study my blood. I suggested they study my lifestyle choices, but to this point, that has not been done.

With Grace and continued exploration around full health, I’ve outlived expectations, and I’ve made life-changing discoveries for myself. I have been able to live a full life and now have gained enough personal experience to help others discover their own healthy choices.

After training to become a New York State licensed massage therapist specializing in Myofascial Release and Shiatsu, I continued on to become a Health Coach. This is where I’ve had the privilege of seeing people’s lives change.

Throughout all my experience, on my own and with the people I’ve worked with, the theme is the same — ENGAGE WITH OUR LIFE. This means

The experiment came with myself first. In my personal quest to explore other approaches to health, I had been reading about Masuru Emoto’s work with labeling and water crystals. The part of his work that I was most attracted to was this idea that we could influence the shape of water crystals by the energy that we directed toward them.
Emoto’s experiments used pictures, music, actually talking to the water, and labeling of samples of water. His findings were that the shape of the crystals formed by freezing the water changed based on the influence of the methods mentioned above.

I was really fascinated by this and began my own experiments with labeling my water bottles. I didn’t stop there, though! Given that our human bodies, depending on our stage of life and health, are anywhere from 90-75% water, I was curious about how the water in my body would respond to labeling. I became conscious of clothing and specifically the messages written on them. Working out of my home, I designed a small clothing line based on wearing positive life affirming messages. More on that in another blog ;).

I started to use body crayons and make-up pencils to write little messages of health on my body at times when it felt like I could use some extra support. I noticed that it made a difference, and it had an added bonus — IT WAS FUN :). It made me smile when otherwise I might not have easily done so.

I also noticed that this labeling idea was a chance for me to make a conscious decision about what type of energy and intention I was calling into my body. It was a simple physical and visual step that helped me to focus attention and TLC where I needed it most.

And still, I didn’t stop there. The next time that I was hospitalized I began to use this labeling with my IV med bags. I began asking the nurses if I could please hold the bags for a minute before they were hung. Once the bag was in my hands I would decide what quality I most wanted to be a part of my treatment at that time, take a minute to actually feel that, and then write the word, phrase, or a sometimes quick picture of it on my med bag.

It only took a minute, but it totally changed the tone of the treatments in such a wonderful way that I have not looked back since. Even on their busiest days the nurses were happy to give me the minute that this took. In fact many of them, the next time they came in, would hand me my med bag without me even asking, while they got my med pump set up.

At this point I was writing right on the med bags themselves with a sharpie marker. Many of my nurses just smiled and handed me both my med bag and the marker next to my bedside waiting to see what I would write this time. Some of the nurses just accepted it as my ritual and didn’t pay much attention. Some asked questions about what I was doing. An added bonus was that a good number of them had a smile on their own faces as they left the room, and I know that they have, with my permission, shared this concept with other patients.

I’ve been labeling all of my IV bags, including my home meds and equipment, ever since. A favorite phrase of mine that ends up on most things in some form is Love and Gratitude. Sometimes it’s just more of a reminder and I do it quickly. Other times it’s a longer pause as I take the time to be very thoughtful about what I want to call on for a particular treatment, before choosing just the right word or phrase. Sometimes it takes a little extra effort to really feel into where I am at. Quick or not, there is no question. EVERY time it makes a difference.

MY DREAM: PATIENTS OF ALL AGES RECOGNIZING & USING THE POWER OF CHOICE AS MEDICINE

So as you’ve read (if you’ve made it this far), I didn’t begin labeling my IV bags until I was a young adult, when I saw the importance of having harmony between body, mind, and medication/treatments. And now I have shared this concept with other adults and children and watched it make a difference in their lives as well.

I want to offer what I have learned so the lives of little ones who walk a similar path can be a little easier, a little sooner, a little more joy-filled, at each step. I want to help them open the door to the power of their choice. Intention is powerful medicine. I know this first hand.

My dream in creating BoosterJots is to be able to reach more people, have a bigger impact on how we look at medicine, treatments, and health care in general. I decided to start with hospitals because I believe there is a teaching possibility in these places. If we can reach the caregivers for the children in these life changing situations, we not only have an opportunity to impact that situation for the child in a positive way, but we have the potential to help them make a major shift in the rest of their lives.

The Booster Jots Concept can help children to start healthy, helpful patterns early on. The basic concept is to give kids a choice in what they will receive as a part of their treatments, to encourage them to think about what will help THEM to feel well.

BoosterJots packets offer something simple that anyone can do to have a big impact on their treatments. My hope is to offer children, and adults too, for that matter, an avenue for choice about how to relate to their care and their life. In my experience, when given the choice, kids start to light up. They naturally choose joy. They know what to do. All they need is a little encouragement.

TO PARENTS AND CAREGIVERS, WITH LOVE

You can help your child make a difference in their own care.

I believe in your child’s healing capabilities. Give them the chance to show you what they will create.

More from Kori at KoriTolbert.com